Welcome to my projects page! Here, I list research projects, software development projects, and some hobby-related projects as well.

I mostly program things that I need to use, which are usually data analysis scripts, research scripts, and other similar software that usually is too specialized to warrant distribution.

Gidget is a debugging game designed to be provided to teenagers. It is a game where you control a robot using an imperative programming language and help the robot rescue animals and clean up toxic waste. I have been helping Andy Ko and Michael Lee with development behind Gidget. Gidget is unfortunately closed-source at this moment and not yet available to the public, but some information has been posted at the University of Washington and some information in the game is available in academic publications.

Gidget and the Idea Garden 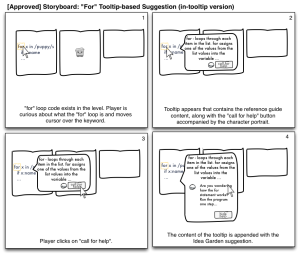 We investigate how software developers build software using an HCI theory, Information Foraging Theory. The theory is a theory of human behaviour that describes how people forage for information. They are predicted to forage in a way to provide maximum benefit for minimum value and to make decisions based on input from the environment that affects this cost/benefit ratio. This theory is applicable to software engineering because software engineering is a very information-seeking intensive activity. People spend a lot of time looking for things—whether it’s “What does this variable do?” down to, “Where can I start investigating this problem?” 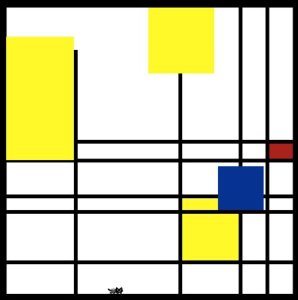 A personal project. The Painter’s Cat is a 2D video game that I made in a real-time period of 48 hours. I’ve written about the experience here, here, and here.

You’re a cat in a dream, and you’re able to paint black, Mondrian lines against a backdrop of musical notes. Avoid the colored squares and try to “bound” the colors to score points.

This was my first experience using PyGame and the first time I’ve “finished” writing a game. As I did the entire game in a weekend, the source code is really dirty and the controls and difficulty are a little off.

I work primarily on Mac OS X using a combination of TextMate and the command line. However, after doing Ludum Dare 26 and coding a lot in a very short period of time, I’m becoming a little unhappy because it doesn’t have a lot of programming support for Python (no interactive syntax checking, no tooltips for APIs, indentation issues, no auto-reformatting, the Run Task box stays alive after I quit so I end up with a thousand Run Task windows, etc). I’m thinking of migrating to something else.

I’ve learned a lot of programming languages, mostly in the imperative style. Here’s what I’ve been using recently.

I probably enjoy using Ruby the most out of these languages, but I tend to use Python a lot because its third-party module support is a little more mature. 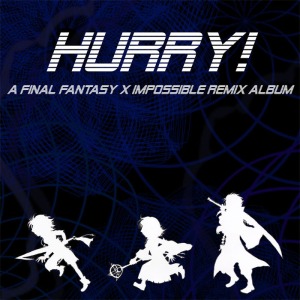 This album came into existence after a YouTube comment alleged that a particular song from the video game Final Fantasy X was so amazing that no one ever remixed it. I co-directed a fan remix album with The Author and coordinated the efforts 9 musicians, an artist, and a webmaster to release Hurry! A Final Fantasy X Impossible Remix Album. The music’s available for free and a number of its tracks were featured on the front page of Overclocked ReMix, a video game arrangement site that is known for its exceedingly high quality music and talented musicians.